Recently, I spent some time working on lookups for Smalltalk systems. It took me some time to get the Cog VM lookup optimizations, and I’d like to explain my understanding. Eliot Miranda has already explained some of it in his post Build me a JIT as fast as you can. His post is really good but when I first looked at it I didn’t understand everything because there are some parts explained by showing slang and x86 assembly which were not familiar to me.

So here it is, the explanation of how the Cog VM lookup works.

When a message (receiver + selector + arguments) is sent, the method corresponding to the message selector is looked up through the inheritance chain.

What happens if no method is found during the lookup ?

What happens if the superclass of a class is incorrect during the lookup ?

What happens if the method dictionary of a class is incorrect during the lookup ?

The VM tries to execute the object as a compiledMethod, triggering the method ‘run: oldSelector with: arguments in: aReceiver’. Look at ObjectsAsMethodsExample in Pharo to have more details. However, some optimizations does not support this feature, making it quite slow in some case. For example, method activation using ‘run:with:in:’ cannot be optimized by Cog’s JIT.

This first case happens when it has been the first time since a huge while that the user looks up a selector for a specific class. The idea is to really do the lookup, going from class method dictionary to class method dictionary until you find the appropriate compiledMethod. Now of course it is done VM side, so it is not trivial.

There is some kind of loop to walk up the class hierarchy (I removed non important data):

As you can see, the first field of the methodDictionary corresponds to the number of methods it has, the second field contains an array of methods, and the rest of the object contains the selector *ordered by hash*. There is a fixed mapping between the selector index in the methodDictionary and the index of its corresponding compiled method in the array. Below is an example.

Now the idea is to order it by hash. However, Pharo having a 12bits hash, it is very common that objects has the same hash. Objects with the same hash are near each other in a so-called bucket.

To find an object, you then need to start iterating at the first object of your hash’s number bucket until you find the object or a nil, meaning that the object is absent. 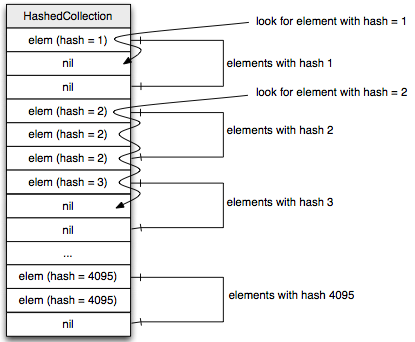 To start the iteration, you need to know the first index of the hash’s number bucket of the object you are looking for. To find this index you need 2 informations:

Then basically if the size of the collection is lower than the maximum hash’s number, you use a subset of the object’s hash bits to have an index from 1 to the hashed collection’s size (and not from 1 to hash’s max number, which would raise an OutOfBound error).

An efficient hashCollection would be full at 80%, letting quite some nil to stop the iteration and not taking too much memory space. However, rehashing all the collection each time you add an element is too expensive, so it is done only when the collection is full (then you increase its size and rehash it). So some elements of the collection are not placed in the correct bucket.

Let’s look at the code. I took the lookup from interpreter VM to show that the VM checks if the method is a primitive at lookup time and not at activation time. Again I removed stuff that I thought was not important to show:

Now that we understood the regular lookup, the first optimization is to have a global cache. As we saw, the lookup currently fetches the compiled method and the primitive index of the method out of the receiver’s class and the selector.

An entry in the cache will then take 4 slots:

The cache has currently in Cog 1024 entries. Why 1024 entries ? Firstly, because this size permits to avoid 97% of lookup, secondly, because it had to be a multiple of 2 for hash mapping.

To add an entry into the global lookup cache, with the same principle of reading it, you try 3 times with the 3 different 10 bits extracted from the hash until you find an empty entry to fill with your result. If no empty entry is found, you then delete the three uncorrect entries and you write your result at the first attempt location.

Note: The problem is that you need to manage the cache in case of a moving garbage collection. In Cog, in this case, the global lookup cache is flushed. You can see the comment: “WARNING: Since the hash computation is based on the object addresses of the class and selector, we must rehash or flush when compacting storage. We’ve chosen to flush, since that also saves the trouble of updating the addresses of the objects in the cache.” in StackInterpreter>>lookupInMethodCacheSel:class:

Then the next optimization is to speed up the lookup at each send site. This is very well explained in Cog’s blog and in Urs Hölzle Phd

The inline cache optimizations consists in optimizing these cases. Basically, after several iterations, all the different classes possible for the receiver of a send site will have been executed. Each time a lookup is executed, the VM saves at the send site the method found.

Case of a monomorphic inline cache, the receiver has always the class Class1. The send site will have been rewritten to:

Case of a polymorphic inline cache, the receiver has always the class Class1, Class2, Class3. The send site will have been rewritten to:

Case of a megamorphic inline cache, the receiver has always the class Class1, Class2, …, ClassN. The send site will have been rewritten to:

Of course you cannot use a Dictionary at low level, so you have instead a hashmap similar to the one of the global lookup cache for the sendSiteCache but this map does not store the selector, only receiver class, method found and primitive function because the selector is fixed at a send site (here it is always foo).

Now we need to think how to implement that on a low level (Assembly code level). There is a size problem, by default you have at your send site 2 instructions that you can rewrite (method := interpreterlookupSelector: selector inClass: anObject class. jitCompiler rewriteMonomorphicInlineCache: method.). So basically you can rewrite 2 instructions in the send site, not a full switch case. 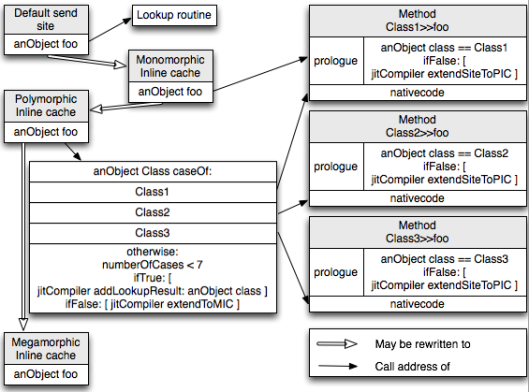 Cog is an efficient virtual machine, but it could be even better. The main developer of Cog VM, Eliot Miranda, is definitely able to make it better. So it is not a problem of skills and knowledge. The problem is to find people willing to pay you to improve the VM …

I will describe in this part some optimizations that could be done in Cog in the future.

Some optimizations take a lot of time to be compiled, so the JIT will do them if the method is called at least 1000 times. Other optimizations are cheap, letting the JIT doing them when the method is called around 10 times. These methods, called very often, are called hot spots. On a regular system, 10% of the methods are called very often (being hot spots), 90% are rarely called. Rarely called methods run unoptimized, but there are with very few overhead in the whole system speed because they are rarely called.

For the optimization examples, I will always refers to these classes:

Here is an example with the different steps of the customization of the method Point>>cartesianCoods. I removed the case where the virtual machine handles the uncommon case where the object is neither a PointCartesian / a PointPolar to simplify the example.

Lastly the idea here it to avoid method activations by copying the code of the called method in the calling method. Obviously it permits to avoid the method activation and all its related costs (but this is usually already removed by the cpu), but most importantly it permits to improve all the other optimizations (such as value numbering, constant propagation, dead code elimination …), by increasing the number of cases where they can apply.

The main drawback of aggressive inlining is that it decreases a lot the debugging capabilities of the Smalltalk system. However, the Self team had found a solution for this problem, with on the fly deoptimization, letting the programmer full debugging power and massive speed improvement.

Having a JIT that does aggressive inlining and nice debugging capabilities (I mean being able to create new methods, edit methods or execute code during debugging, I do not mean crappy debugging like it is available in java systems where you cannot create a method without recompiling and restarting the current execution flow) is possible (done in Self and Strongtalk) but very hard.

Currently virtual machines in production with aggressive inlining strategies are for example Java hotspot, Javascript V8 or C# CLR. Python’s Pypy has a different strategy, using metatracing to create trace of inlined methods, which is seemingly faster to implement but slower at runtime.

There is 2 ideas here:

Merging conditions is a basic idea, it applies if several conditions are executed on the same side-effect free expression. For example, if in your method you have twice a condition on myObject isBehavior, you can merge the different branches to have only one condition. But wait, in object oriented programming we never write conditions ! This optimization is not good ! In fact it is good, because polymorphic inline cache are switch cases, so they benefit from this optimization.

The second idea is to improve the inlining capabilities of the system. To reach maximum speed, method’s native code should not be too long (for example, in Self they limited the size of the native code of a method to 2000 instructions). This is because the instruction cache of the cpu is not as good for bigger method. However, you want to inline as many methods as possible to have a fast system, without taking care of this limitation. Therefore, when your method reaches its maximum size, you can look for multiple polymorphic inline caches on the same receiver, and merge them. However, instead of just merging the code in the method, you’re going to write the code for each case in a separate method that you will call (these new methods will only be referenced by inline caches, and will not be in the method dictionary). This will permit each newly created method to be optimized in a better way (having now inline cache instead of PICs on each selector), and will permit the main method to be smaller, allowing even more inlining.

Here is an example with the different steps of the message splitting of the method WeirdoClass>>cartesianCoodsOf:. Again, I removed the case where the virtual machine handles the uncommon case where the object is neither a PointCartesian / a PointPolar to simplify the example. Note that:

To sum up, message splitting permits to:

3 thoughts on “The Cog VM lookup”